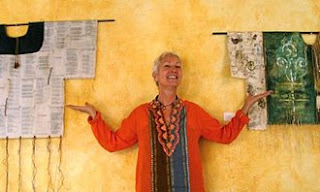 The image of a Huipil (wee-peel) takes center stage in an upcoming exhibition at Sol y Luna Contemporary Gallery in Old Town Puerto Vallarta. Opening with a wine reception on January 28, the show has been named "Enigmas" by the talented artist, Lena Bartula.

Lena explains what hupils are to her: "Huipil is a Maya woman's traditional blouse; it is her identity, a marker of her village, her status, her background and beliefs. The weaving of this garment is both a sacred duty and a personal statement, woven with her own designs, colors and ideas, yet all within the context of her tradition."

Bartula is sure that never in this lifetime will she understand all the codes whispered within their threads. They are beautiful, mysterious and holy. It is said the goddesses reveal the weaving process in dreams. They are enigmatic in that the symbology originally woven into them, as related to religion, agriculture or astronomy, had to be hidden.

With the Spanish conquest, as with all conquests, a 'cover up' had to be devised so that the traditions would not get lost. This exhibition, "Enigmas," aims to shine a light on the significance of these magical garments, as well as the women who weave them.

The huipil shape is reverberated throughout the exhibition, with or without the ubiquitous details one would normally see on this clothing. Symbols for rain, serpent, corn, or cosmic signs such as sun, moon, eclipse, show up enigmatically; some paintings include not the shape itself, but rather a design or a detail that prompted me to examine another part of the history of these textiles.

The heart of the contemporary Maya still beats to the rhythm of the seasons, planting and harvesting of corn is still sacred, as one painting, "Secretos del Maiz" suggests. In "Sing With Praise" we see the toad and the saints, both instrumental in bringing the rain needed for the crops.

The neck opening of a huipil is thought to represent the center of the world into which the wearer places herself, as seen in "Axis Mundi." "Eclipse" tells of the goddesses who come in dreams, but who since the conquest are known as Santa Lucia, Maria Magdalena, or other saints.

As in a celestial eclipse, the light of these beings was simply covered over for a time. Other works, "Whitewash" and "Weft/Warped," also employ the power of words in the titles, to covertly discuss the politics of conquest. With the words Text and Textile entomologically linked, such wordplay seems perfectly appropriate for a text and image artist like herself.
Posted by solylunapv at 11:49 AM No comments:

Art where we live 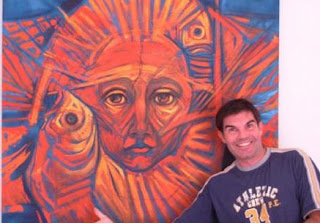 Alejandro with a painting by Roberto Lopez Ramirez

Alejandro Baez, owner, director and curator of Sol y Luna Art Galleries is a visionary when it comes to displaying the art of the thirty multi-faceted artists he represents. With a vast variety of techniques, mediums, sizes, and palettes, he has arranged art to be displayed where it can be seen. The atmosphere of Sol y Luna Contemporary Art is a place of wonder, with fresh exciting talent showcased along with accomplished artists from North and South America as well as Mexico. With sculptures, paintings, photographs, and objets de arte, he entertains the public with openings that are artistic events with Aztec dancers, opera singers, or poets.

Looking at art is an adventure of the the senses. Choosing that particular piece to fulfill the vision you have of your own space, whether it be home or office, should be a moment of revelation and joy. Alex Baez gives you his personal attention so that you can begin or complete an art collection that is brilliant, fascinating, and perfect for you.
Posted by solylunapv at 12:34 PM 1 comment:

Opening: Love is in the Air 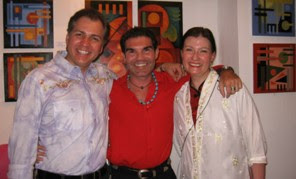 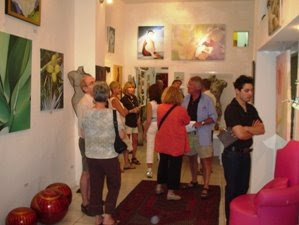 Love is in the Air
At first glance, the artworks of Sushe Felix and Don Quade appear to be deceptively simple. However, the dramatic brilliant colors and charming arrangements of forms and shapes in a Sushe Felix painting create a response in the viewer that is highly unusual: a sensation of euphoric joy. Although the work is abstract, she considers it symbolic of the natural world in its orderly composition and use of organic, geometric forms. By adding different layers of textures, various papers and foils, she attracts light to the canvas and adds dimension. Influenced by the Transcendental Painting Group of Santa Fe, New Mexico and the abstract painters of the 30’s and 40’s, Sushe works in acrylics, and uses paint, college and various mediums to give her paintings depth and movement. Because her artistic presence is indivisibly part of the over-all composition, it is easy to fall in love at first sight with her paintings without hesitation.

Don Quade as well uses mixed-media paintings and collages to reflect his fascination with the abstract geometry found so abundantly in nature. Exploring the idea of garden as metaphor, his paintings focus on the transitional and transformative phases of nature’s life cycles. He specifically examines and captures these juxtapositions found during the “in-between seasons”, those moments in time that mark subtle shifts in cycles from chaos to order and then back again. By using both representational and abstract techniques, through painting and collage, he highlights the importance of the garden as a fundamental pivot where nature and culture convene and transform one another. With his repetitive patterns and balance of form, his paintings are meditative, like sitting in a Zen garden and reflecting on both life’s unexpected surprises and precise order.

Don Quade grew up in El Paso, Texas and is strongly influenced by the vast open space and clarity of light and hues found in the southwestern desert. He holds a Bachelors of Fine Art from Colorado State University, and has worked as a Graphic Designer before shifting his concentration to painting and mixed media collage. He has continued his studies of painting and collage through the Taos Institute of Arts and the Arts Students League of Denver. His work is in numerous international private & corporate collections.
to find out more: http://www.solylunapv.com/
Posted by solylunapv at 8:48 AM 2 comments:

solylunapv
Puerto Vallarta, Jalisco, Mexico
I am the owner, director, and curator of two galleries in Puerto Vallarta, Mexico: Sol y Luna Fine Contemporary Art & Art for the Uninhibited. I represent over 30 international artists, the foremost accomplished and talented contemporary painters, photographers, and sculptors from North and South America as well as from Mexico.